When faced with a recession, most firms cut back on advertising alongside cutting other costs, yet there is a body of evidence that suggests a positive impact for companies that keep advertising during a recession.

• Why do marketers need to continue investing in brand advertising?
• What is the type of advertising that works best under the current circumstances?
• How can TV and Radio brands equip themselves with the right set of tools and arguments so that they can gain in efficiency when they approach their client base, both the advertisers and agencies?
• How can brands defend their share of voice and seize their market opportunity?
• What does a good “long term strategy” mean in this context of crisis? 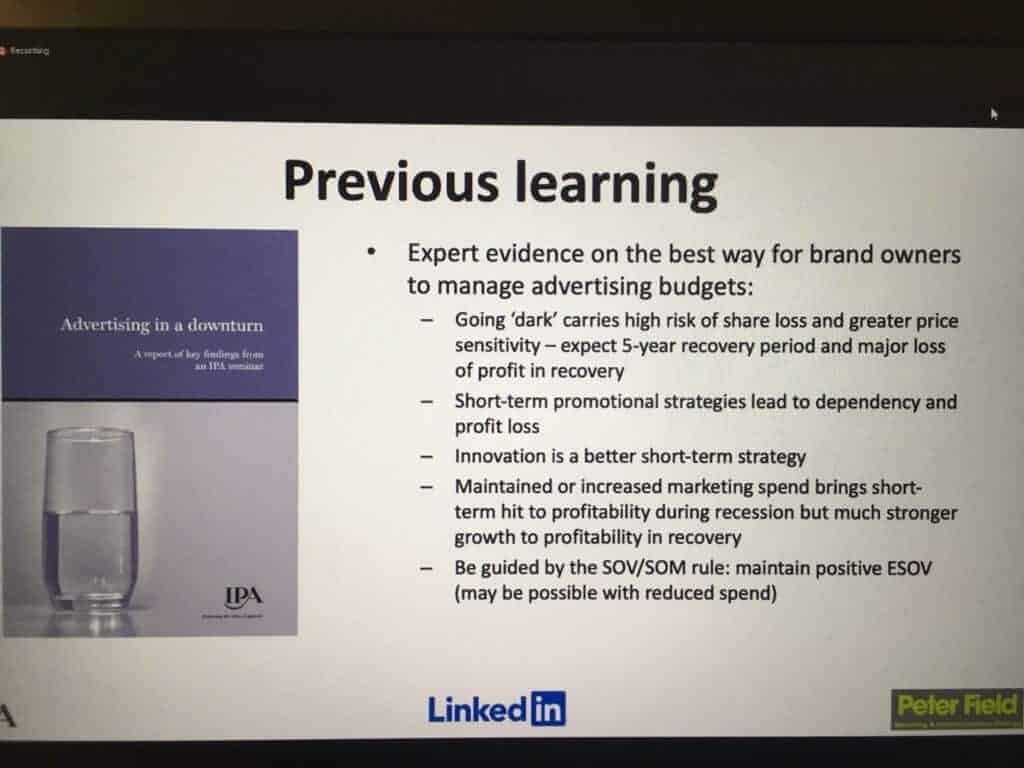 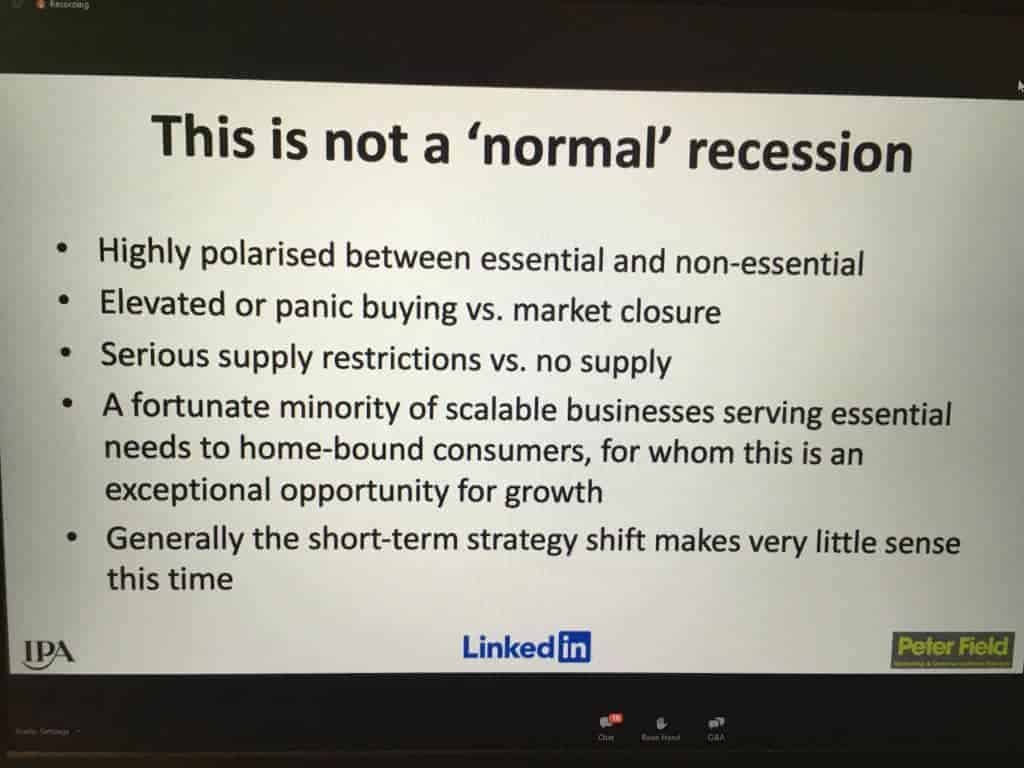 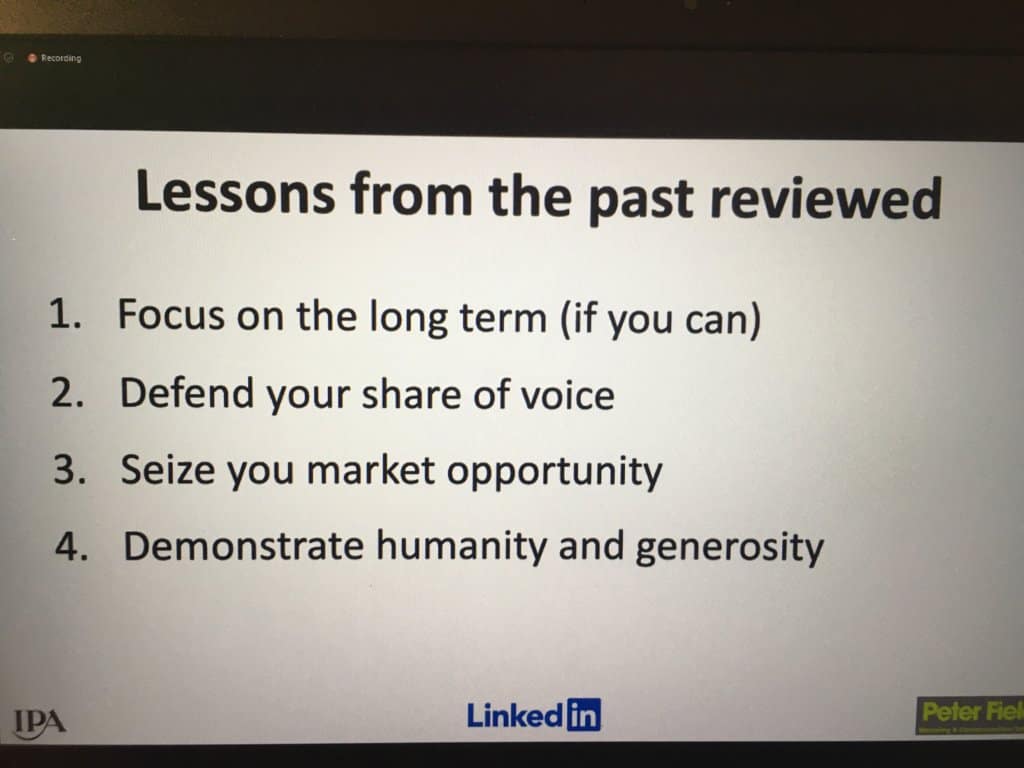 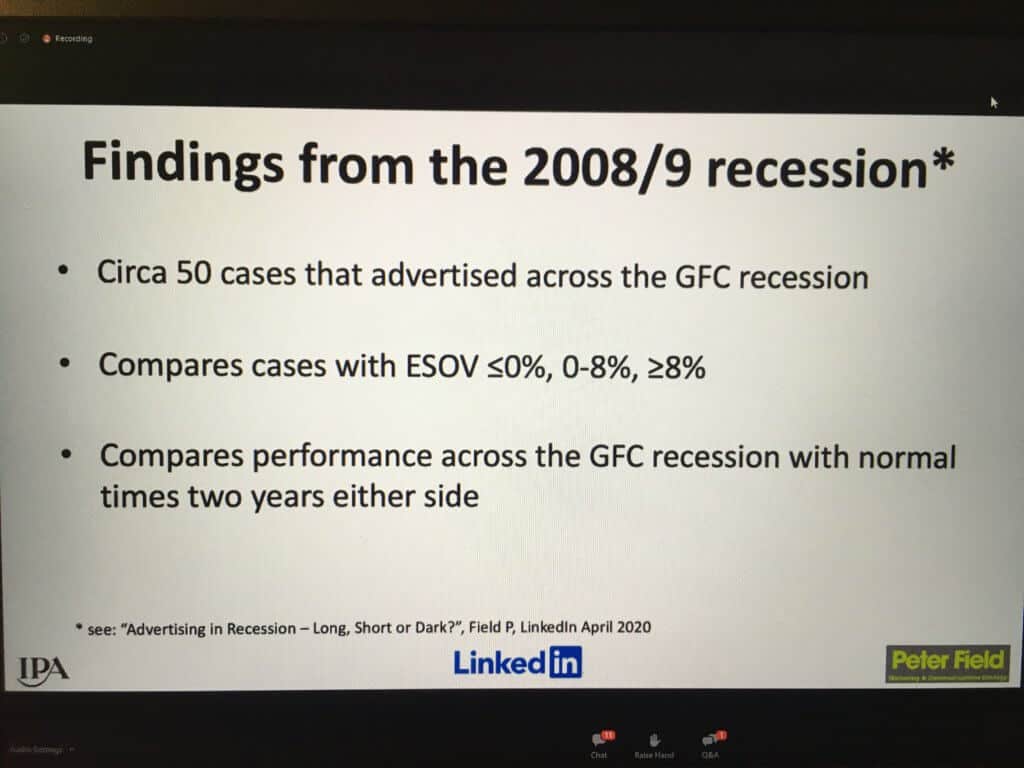 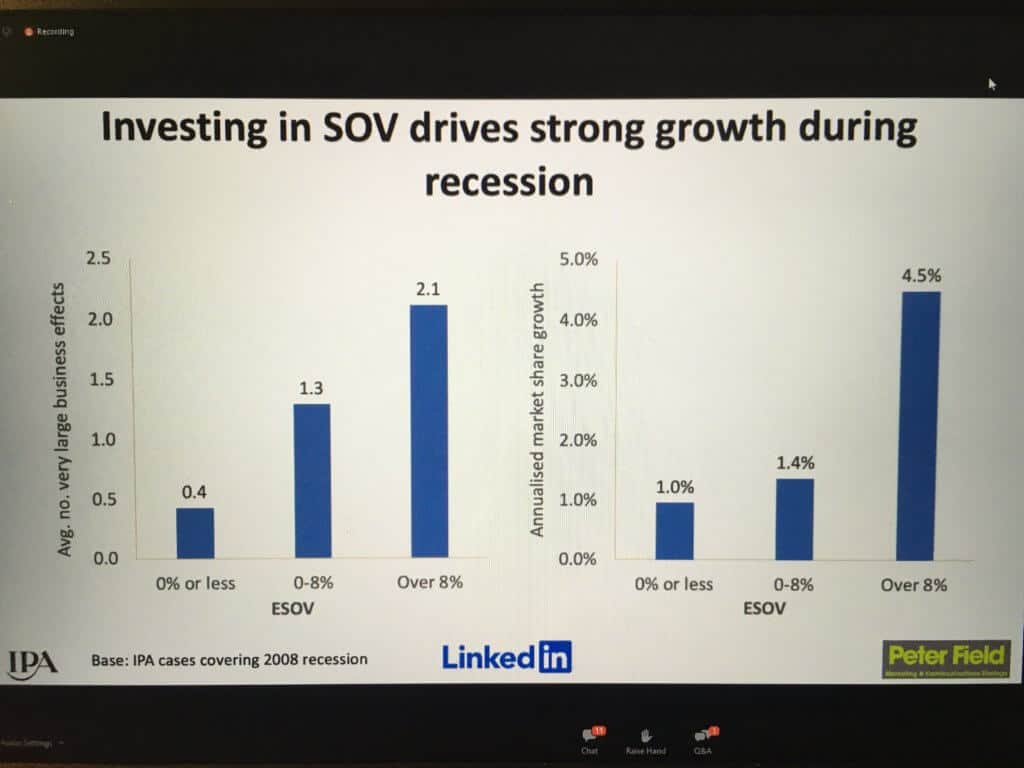 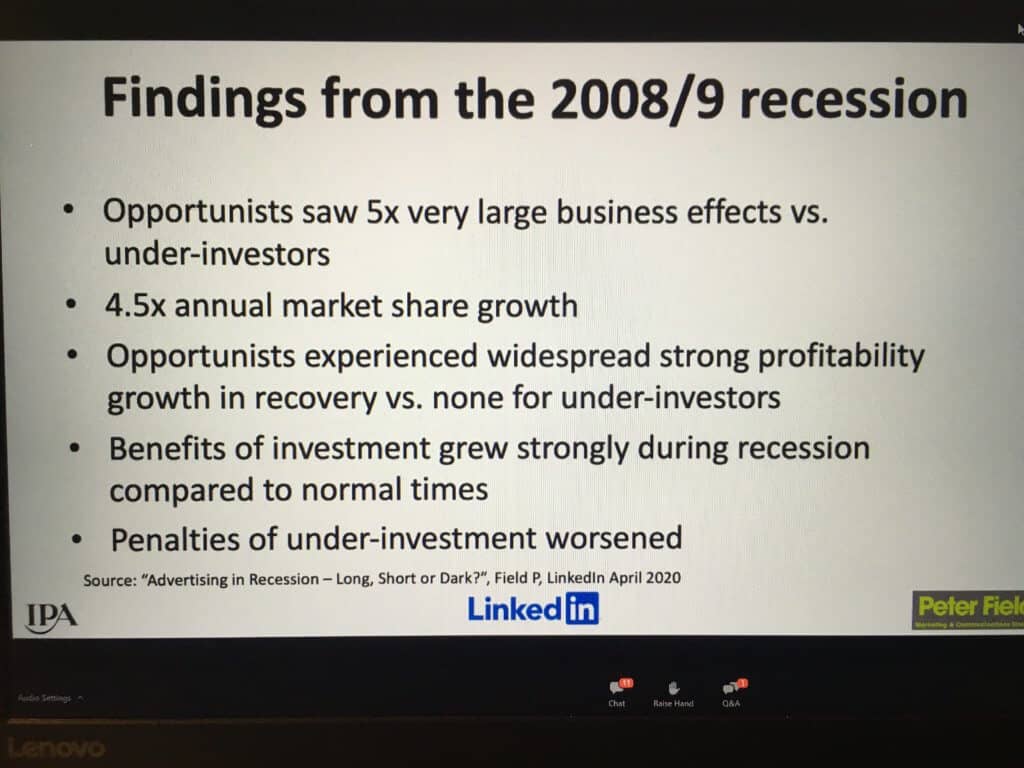 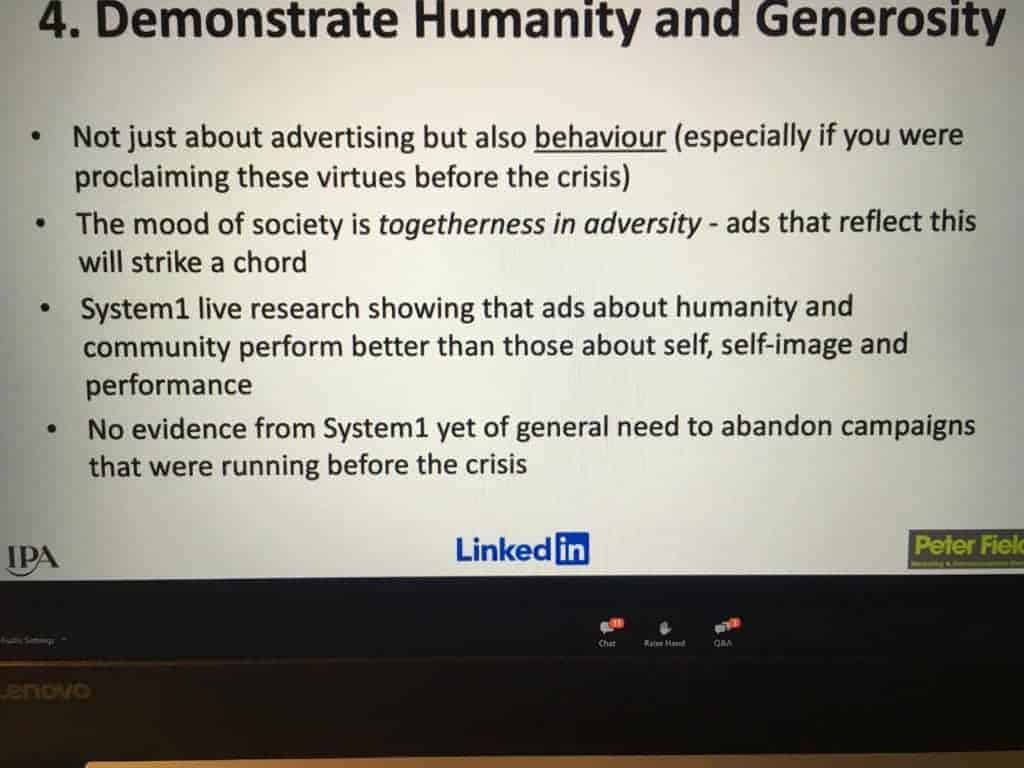 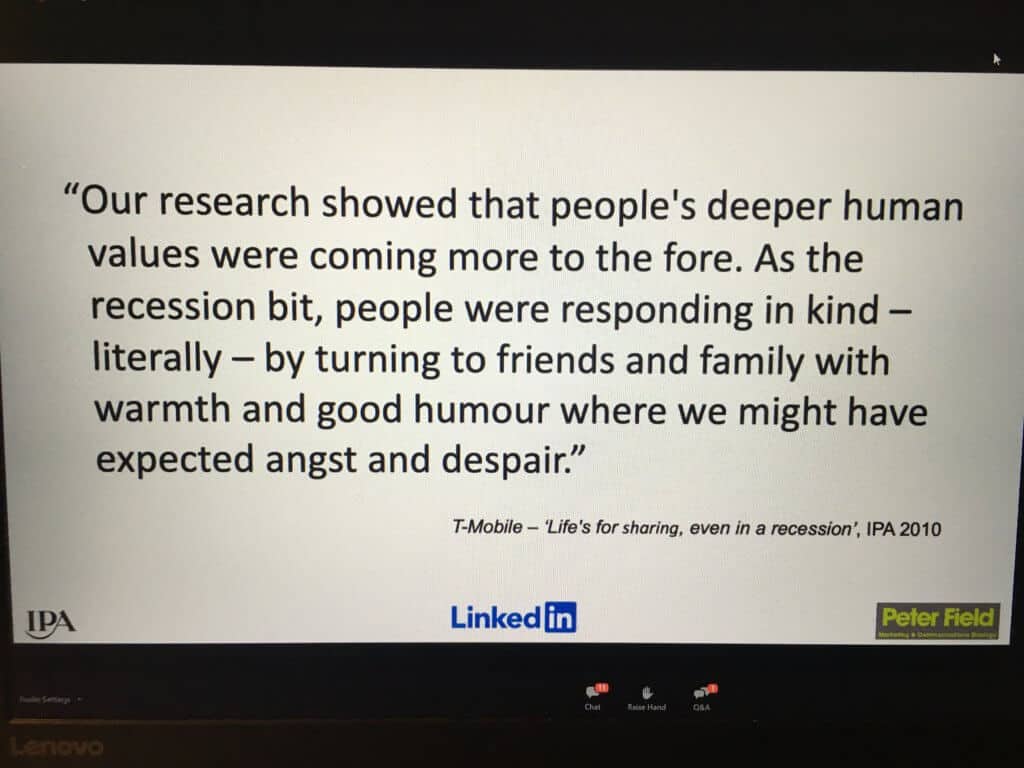 This paper reminded me of a logo drama many years ago. The client – on instructions from Head Office – wanted to super the Group (a big listed plc.) logo in the end-frame of their first ever TV commercial. We dug our heels in with local management based on irrelevance to the Target Market & Brief. Eventually, air-date approached, and I was sent to present the campaign to the CEO and Executive Committee. The CEO loved the spot – the Media and Production budget being no small dough to them. He patiently listened and then explained that his target market wasn’t just the end-user; it was the Stakeholders, Workers and particularly the Institutional and Retail investment community that held, bought or held their stock. He reckoned that to number about 3000 people in total, his target market. The logo appeared. The Campaign was well received. Sales maintained momentum. The acquisitive group soared to greater International heights. And the share price grew …

Using granular minute-by-minute television advertising data covering approximately 326; 000 ads, 301 rms, and $20 billion in ad spending, we study the real-time effects of TV advertising on investor search for online nancial information and subsequent trading activity. Our identification strategy exploits the fact that viewers in different U.S. time zones are exposed to the same programming and national advertising at different times, allowing us to control for contemporaneous confounding events. We find that an average TV ad leads to a 3% increase in SEC EDGAR queries and an 8% increase in Google searches for financial information within 15 minutes of the airing of that ad. Such advertising effects spill over through horizontal and vertical product market
links to financial information searches on closest rivals and suppliers. The ad-induced queries on the advertiser increase trading volume and contribute to a temporary rise in the stock price. This suggests that advertising, originally intended for consumers, has a non-negligible effect on financial markets. We are now in the ‘hope’ phase of the crisis. Hope to be let out, hope to go back to work, hope to find a cure.

I suspect we will very quickly enter the ‘Reality’ phase of the crisis which will really hammer consumer sentiment as Social Welfare payments taper off and the potential implications for a second wave of C-19 becomes apparent.

Business has been suffering a lack of confidence due to the death by a thousand cuts of Brexit negotiations over the last few years. Now workers will find themselves unemployed and Businesses will find themselves unable to reopen and there will be a surge of insolvencies with associated debt issues which are going to compound an increasingly difficult situation in the short to medium term, well before a treatment or even a vaccine.

The resumption of the US China trade war – and potentially a real war to help the Maniac get re-elected – is further going to dent confidence and consumer spending and that’s before we experience the full effects of a hard Brexit.

We need strong leadership and let’s hope the current bunch of well rewarded wastrels who fell asleep in February can get their act together and give us badly needed social and economic direction before long. I also believe that they need to look after individuals and Medium to Small business rather than the large corporates to kickstart economic activity and by that I don’t mean lorrying unwanted debt on them.

There are big increases in consumption of all media except OOH and Cinema which has zero footfall.

There are big declines in ad revenue across the board.

There are great deals to be had.

All the media gurus will tell you to invest now, to build share of voice and emerge from the crisis stronger and that’s true if you can afford to be brand building for the long-term or have a direct route to your consumer.

However, unless you have the logistics in place or a doorway to the consumer open – or can create such a doorway – our view is to hold your powder until such a time as you do. Plan for that route to your customer when it will perform rather than spend now and hope your customer remembers your business.

Your tone of voice is also important. People’s behaviour has changed – deep and lasting changes to the way we shop, work, travel and simply move around and will not return to ‘normal’. We all need to get to grips with the Novel Normal and deal with it.

To that end the AAI proposal to seek a tax rebate on Ad Investment is welcome and something that would help clients – who can afford to advertise – to ease their way into some activity.

The transformation to our Novel Normal is going to be painfully slow and expensive.

Why would you spend money on new clothes, jewellery, accessories, shoes when you aren’t going anywhere? Furniture, Tech and Food for the stay at home, certainly. Replace your vehicle if it’s about to cave in, maybe.

As Lula da Silva noted, the way to a customer’s purse is through their Heart. However, the heart is now fearful and is going to say hold on to what you have. Savings will grow.

Broadband has enabled White Collar workers to work from home. Office space anyone?

Bookclubs, wine tastings, quizzes, even interviews are doable on Zoom.

Activision’s Call of Duty Warzone launched on March 10 and now has 60 million gamers in less than 28 weeks.

Scroll back to top